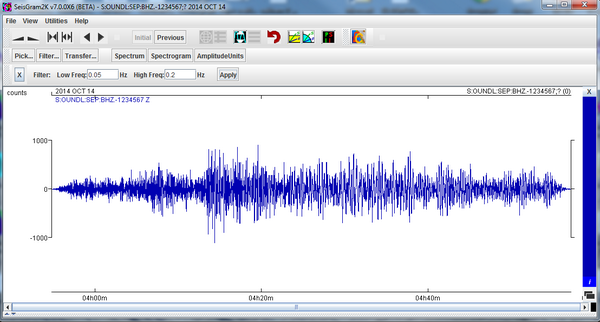 Seismic record of the Mw 7.2 earthquake, October the 14, off coast of central America, Oundle station (UK)

‘Real science with real data’ is the statement that best summarize the British project for teaching seismology at schools. The British Geological Survey (BGS)  involves almost 200 all grade schools to realize a seismic network based on a simple seismometer system to record large earthquakes happening everywhere in the world. For project details please visit the website. Despite of the low number of local and regional earthquakes occurring in the United Kingdom the project has been successful. The latest earthquake recorded by the school network is the Mw 7.2 occurred in the Off coast of central America this morning at 3:51:40 (UTC). The figure shows the record at Oundle (UK).