The Chile earthquake from the shadow zone

Our SEP seismometer has recorded the strong earthquake (magnitude Mw=8.3) occurred at 10.54 p.m UTC September 16th along the Chile coast. Here is the plot of a two hour seismic signal starting from the earthquake origin time. 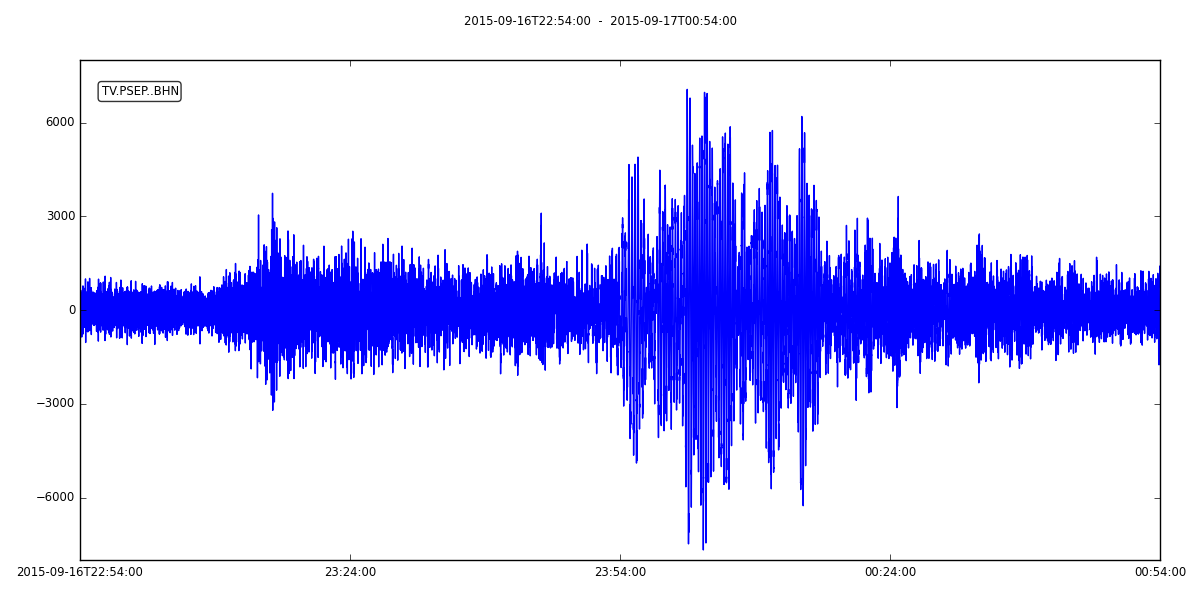 Sesimic signal of the Chile earthquake recorded in Pisa september the 16th.

The first waves arrive 14 minutes after the earthquake, but their signature is not so clear on the seismic trace. Why? Because we are recording an earthquake occurring almost 12.000 km from Pisa corresponding to an angular distance of about 106 degrees. 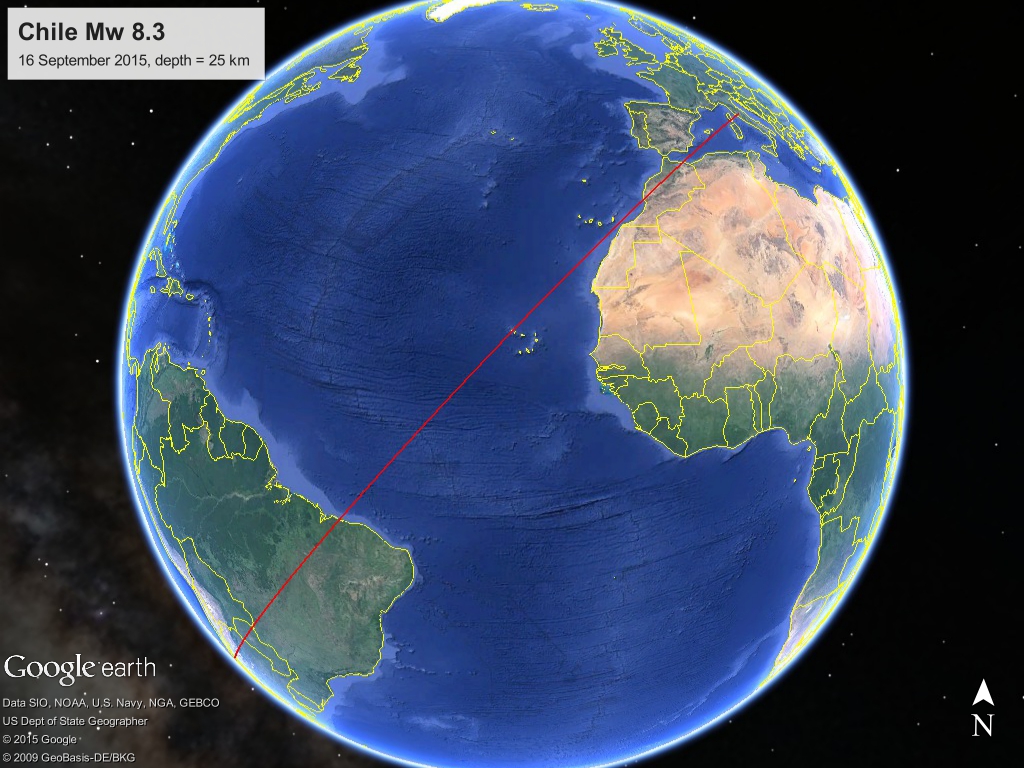 Distance between Pisa and the Chile earthquake epicentre on the Earth sphere. It is an arc almost 12000 km long corresponding to an angular distance of 106 degree.

This means that Pisa is in the “shadow zone”, the area located between 104 and 140 degrees of angular distance  from the epicentre where direct P waves are not recorded. Indeed between our observation site and the epicentre of the earthquake lays the Earth’s outer core which is liquid. The effect of the liquid outer core  is to slow and diffract the P waves paths, and totally shield  S waves (S waves are shear waves that cannot propagate into a liquid medium). 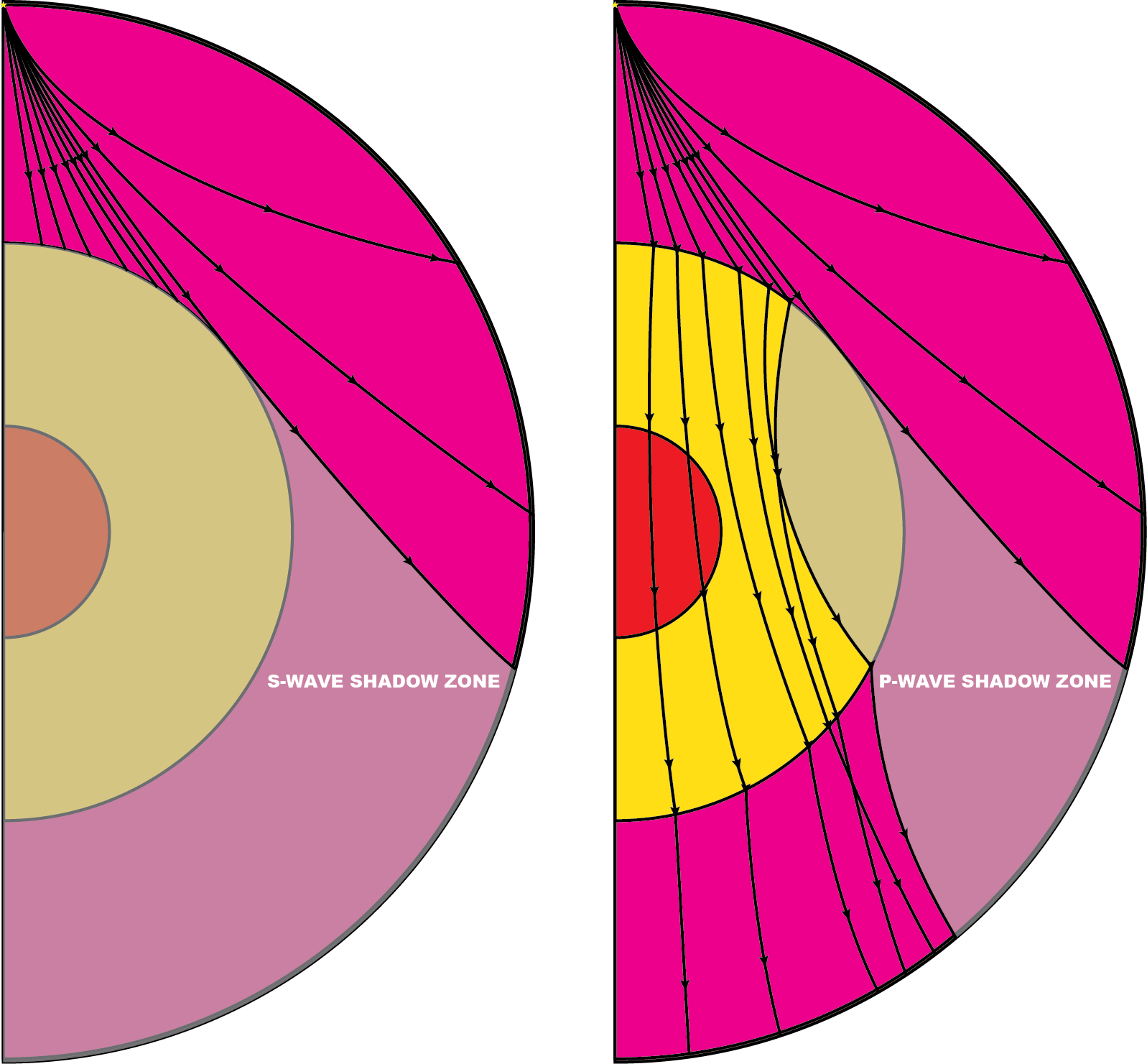 Effects of the Earth outer core on the propagation of the S (left) and P (right) waves, respectively. While the S waves are fully shadowed beyond 103 degrees angular distance, direct P waves emerge for distance larger than 140 degrees after propagating in the outer core.

In the figure below we show the ray paths of some seismic phases that first arrive from Chile (the hypocentre is indicated by a yellow star while the red triangle is the seismic station in Pisa). The first arrival is the diffracted P-wave (Pdiff) with a theoretical arrival time of about 14 minutes. This is followed by other phase arrivals such as the PKiKP and PP (although traveling along very different paths they arrive almost at the same time, about 18 minutes after the quake), next come the  SKiKP phase (22 minutes later) and finally the SKS (after 25 minutes). 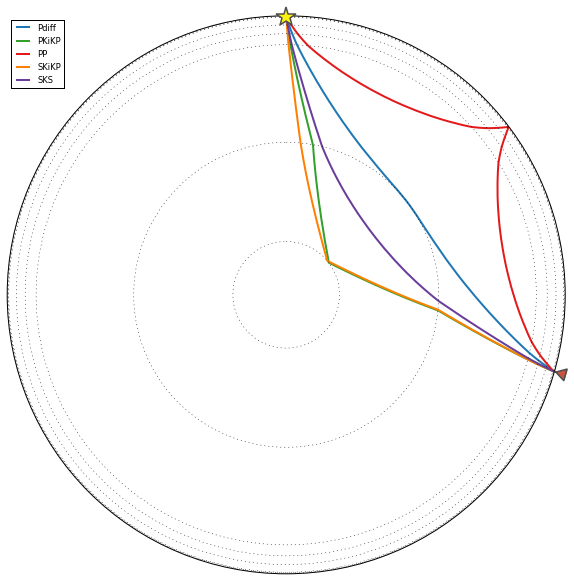 For a nice review on seismic phases naming and  effects of the “shadow zone” please read this document on IRIS website.

However, the seismic signal we recorded is dominated by surface waves arrivals as we can see in the next picture where a low-pass filter at 10 s is applied. 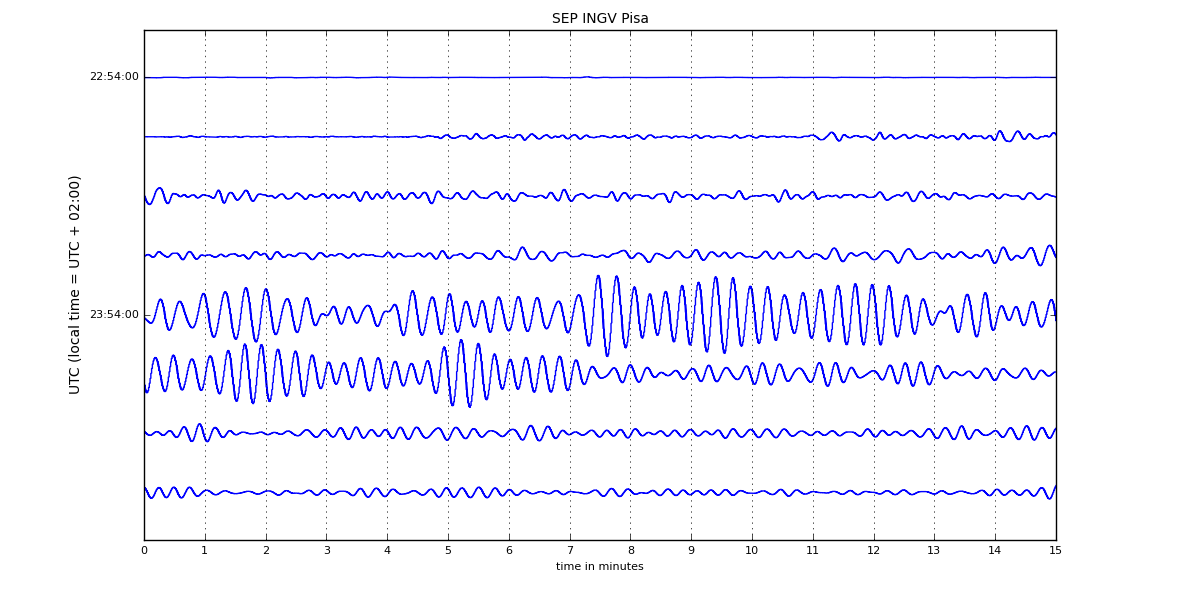 The main surface waves train reaches our location 60 minutes after the main shock: these waves are traveling along the surface of the Earth at low depths where rocks are less compact and, consequently,  with a slower speed with respect to the body waves crossing the Earth’s interior. We can approximately estimate that the surface waves covered the 12.000 km between the epicentre and Pisa in 60 minutes, resulting in a velocity of about 3.3 km/s.